Posted by Unknown at 1:45 AM No comments:

Chesil Beach is a fantastic place with a history of shipwrecks, sea monsters, smugglers and pirates. This intriguing history inspired The Portland Chronicles, my time-travelling stories for children set on the Isle of Portland, following the adventures of Isabel, her annoying little sister Suzie, a badly behaved sheepdog called Gregor, and Ryder, a local surfer.


Chesil reaches in a giant arc of pebbles from Portland to West Bay. Its bank of jewel-bright stones shields Chiswell and Ferrybridge from the Atlantic storms, but the many shipwrecks that lie within the arc of Chesil are evidence of the deadly power of its waves.

Intriguingly it is home to the Veasta, a mysterious sea monster that inspired my first story, The Portland Sea Dragon. The Veasta was first seen in 1457 and its last recorded sighting was on the day of the solar eclipse in 1999. Flintlock, my 17th-century smuggler, describes it as a fiendish creature that rises from Chesil waves: ‘Some folk see a great fish with a curved tail. Others a giant sea horse.’

Inspired by this strange monster and the ever-changing seas of West Bay, the Portland Sea Dragon is a green and gold sea-weedy creature. In the story, Isabel travels into the past, encountering smugglers, witches and a sinister mermaid, to find this elusive dragon. Lucky Isabel flies with the dragon along Chesil Beach, heading into the mists of Moonfleet country.

Smugglers and pirates have long been associated with Chesil Beach. Smugglers arriving late at night on the dangerous, sloping bank could tell their exact position from the size of the stones, and pirate ships lie beneath the waves.

In Portland Pirates, while marauding pirates are busy a’piratin’ the Isle, Isabel finds their ghost ship, the Fortune, lurking off Chesil Beach, its honey-coloured wood gleaming in the golden light of the famous Chesil sunset.

I grew up on Hayling Island, in some ways a similar world to the Isle of Portland. I was often free to roam and explore, to study the sea and its moods, dreaming of ghostly pirate ships, bottles with secret messages and terrifyingly huge waves.

The Spirit of Portland: Revelations of a Sacred Isle by Gary Biltcliffe is a great read.

Carol took a degree in English Literature and History at University College, Chichester, trained as a teacher, and worked in publishing for several years in Petersfield. She left work to bring up her three children and moved to Portland in 2005, then later to Wyke Regis. She has been adviser to young people for Connexions South Central and Waves, Weymouth, and enjoys meeting youngsters and talking to them. She regularly gives talks to school children about her inspiration and writing. 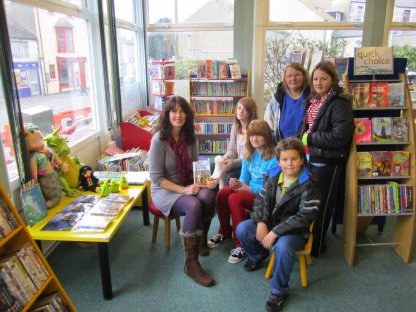 Carol also writes a blog and is on Facebook and Twitter.
For an interview with her see Cyderscribes.

‘Carol has the knack of bringing to life the local myths of the island, in such a way that a girl of 66 can enjoy the fantasy of it all. In this story, Suzie even shares my enthusiasm for cats!’
(Barbara aged 66)

‘I love spotting the real place names in Portland Pirates. Now I want to go to Portland Bill and look for the mermaid.’
(Madelaine aged 9)

‘I like it that it’s kind of a ghostly pirate ship and crew from the past, but they’re also real, raiding the shops and eating baked beans. The chapter endings are good cliffhangers, you wonder what’s going to happen next.’
(William aged 11)

Her series of four books can be read in any order. And so you can explore some of the places and things she mentions on Portland, each book contains a unique map, designed by local artist Domini Deane, who also drew the beautiful motifs inside the book and painted the stunning covers. 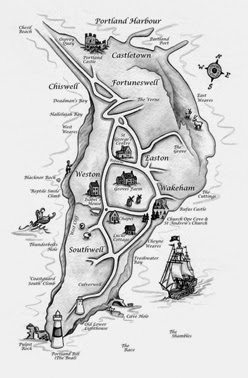 Her books are on sale locally and available from publisher Roving Press.
Posted by Unknown at 3:05 AM No comments: