The Dorset Countryside in October

Our best-selling book at the Dorset County Show this year was A Dorset Country Calendar  by Andy Case.
Andy’s observations of Dorset wildlife, weather, local matters and farming around Milton Abbas are reminiscent of a gentler place and time, and his simple pen-and-ink drawings delightfully illustrate his writing. 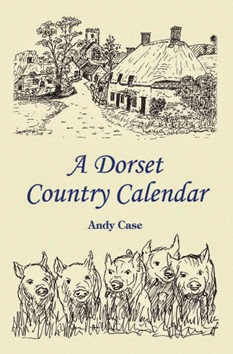 Andy stopped by to say hello to us on the Roving Press book stand at the Show, in between winning prizes with his Oxford Sandy and Black pigs, which he does most years. 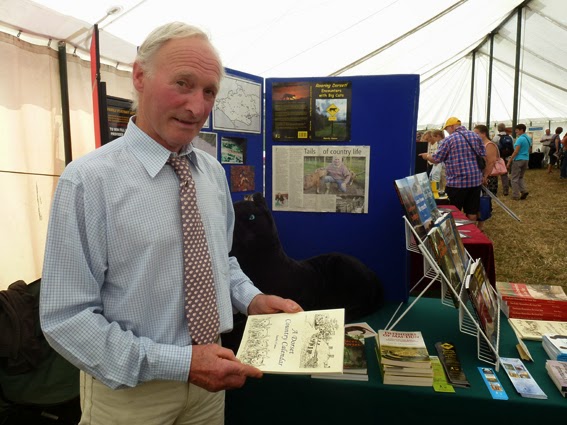 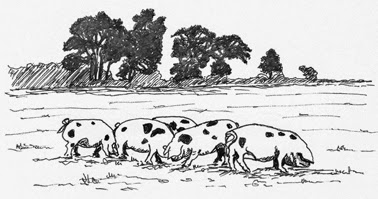 In the book Andy writes:

‘The Dorset County Show was a good show, with many more stall exhibitors this year. In the 1950s it thrived too, when there were many feed and corn merchants, sadly now all gone – firms like Blandford & Webb, Dorset Farmers, Christopher Hills and the like, whose marquees were a familiar sight. It was the custom to have lunch and tea and a drink with them. The food and drink were copious. Father would meet up with his farming friends and they’d go from tent to tent swilling down free whiskys and become more animated and unsteady throughout the day. 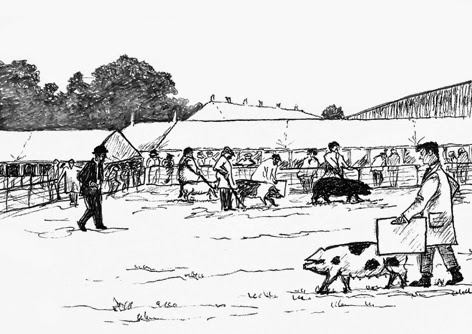 One year, I remember, Christopher Hills put on badger’s ham sandwiches. Imagine the outcry if it happened today? Everybody had a good day. People dressed up, the men in country tweeds and the women in colourful dresses, some wore hats as well. At the end of the day, the now redder-faced farmers could be seen threading their erratic ways like sheep through the parked cars, followed by their wives, weighed down with children and brown carrier bags.’

A Dorset Country Calendar looks at what's happening in the Dorset countryside throughout the year and is ideal for dipping into month by month. Here’s something for October:

‘Darkness and damp lay heavy in our fog-bound valley at the bottom of Long Ash hill. All was still except for the continual dripping of the trees. Sounds carried clear and far. A mile away, I heard Hilton Church strike three and over the hill the Abbey schoolboys cheering on their first XV team. Two or three days later, the wind backed to the south-west and blew hard to make all the leaves turn up and show their undersides – a sure sign of rain, as the old men always say. Suddenly, it became very mild as the warm front came through. The wind slipped under the cloud and brought the longed-for rain. The next day the grass had grown 2 inches because the soil was still so warm and the weather so mild.

The swallows have gone and so have the last of our runner beans. One tends to get fed up with them when you have been picking them since the middle of June. 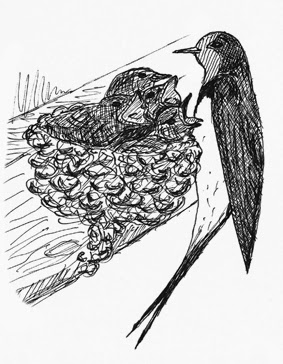 In the woods there are crunchy leaves to scuff, the smell of autumn and a wonderful crop of chestnuts. We must have picked a bucketful and all for free. The prickly outer covering is easily dealt with by stamping on them and the nuts burst out under the pressure. Raw or roasted they’re lovely now the nights are drawing in.

We had one of those gorgeous golden days recently, when the grass is covered with spiders’ threads. It’s when you see ‘gossamer’, a passing floating thread with a tiny spider suspended like a parachutist. This wondrous spider activity is a sign of rain; we had some later, though only a drop fell. 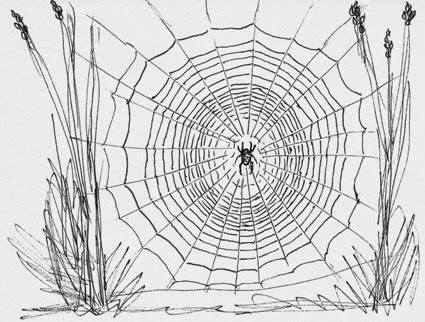 We never see glow worms now. By chance, I read an article that described why. It’s because of light pollution; those people who leave their outside lights on in towns and cities, and the illuminated motorways and junctions. The glow worm needs darkness, real darkness, to thrive and to mate

Last Tuesday I was stood by the yard gate, facing the road and the farm buildings, unlocking the padlock and chain. As I fiddled with the key a rabbit ran from behind me and almost jumped over my foot. A second later a stoat followed it, just missing me. I watched in amazement as they crossed the road, the stoat chasing the rabbit. They turned and ran towards the farmhouse backdoor and out of sight. Three seconds later they came back one behind the other, re-crossed the road, passed over my boot, through the yard and fence, up the bank, and were gone! 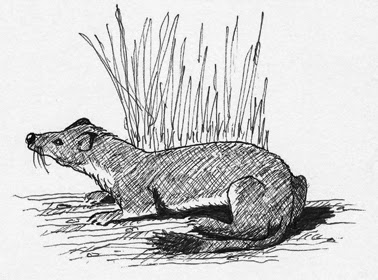 Stoats will throw themselves about by contorting their bodies to mesmerise their prey, aided it is said by a parasitic worm that enters the stoat’s brain by its nose and eventually kills it. As stoats appear not to have any predators, except man, I can believe it. Sheep have a condition called ‘Gid’ which is caused by a worm that goes up one of their nostrils and into one side of the brain. The poor sheep runs around in unsteady circles and often falls over. In times past it was said the old shepherds would punch the affected sheep in the head – they must have had fists of iron, a sheep’s head is very hard – to crack the scull, to loosen the worm and cure the sheep.’

We hope you have enjoyed these extracts from Andy's book and they have put you in the mood for autumn. The book is available from Roving Press, priced £6.99, an ideal personal present for anyone who loves the Dorset countryside.