The other week, I spent a fascinating morning at the HiddenHeritage Conference 2016. The venue was the lovely Town Hall room in the CornExchange, Dorchester.

Various speakers talked about our ‘hidden’ heritage. The first speaker, Tristan Boyle, explained the term ‘hidden’, suggesting something forgotten, unknown or simply boring. He stressed that archaeologists need to engage with the public to make heritage less so.

“History is questionable, and it’s OK for us to use terms like maybe, sometimes and possibly, as the past cannot be truly known. Each new discovery changes something else, and so archaeology is dynamic. As we learn things, the past informs the present. Archaeologists should not just be interested in the past; they also need to be interested in the present and future. Indeed, history is used to promote current political ideas. But history is always changing.”

David Bruce then gave us the example of the High Cross of Bristol. This was originally a symbol of Bristol’s free city status. The Cross used to be at the centre of the old city, but it was removed, and without it, Bristol lost a sense of where its old centre is. It now stands in the gardens at Stourhead.

Trees are part of our everyday heritage, though often overlooked. Andrew Hoaen spoke about Veteran Trees and Ancient Woodlands. “Some oaks in Britain are more than 6000 years old, and there are many examples of yews aged more than 1000 years old, especially in churchyards. Britain is alone in Europe in having so many old trees.”

“Human interaction with trees is interesting – trees can tell us a lot about human activity. There are particular trees of special interest; for example, meeting oaks, where people met at crossroads, and  offering trees, often with ribbons tied to their branches, which still happens today. Any tree with a girth of at least 5 m is a tree of interest.”

“However, old trees have no official status and no statutory records exist, so they are largely ignored by historians. The main organisations concerned with them are the Woodland Trust, Ancient Tree Forum, Natural England, Forestry Commission, Historic England, and local government. A Tree Preservation Order is the best way to protect a tree, or if they are part of an SSSI or Scheduled Ancient Monument or garden. Indeed, gardens are recognised for their cultural interest, but not so woodlands and agricultural land.” He suggested that we have become too monument-centric focused, and the living vegetation at a site, including trees, contains important information about our landscape history. 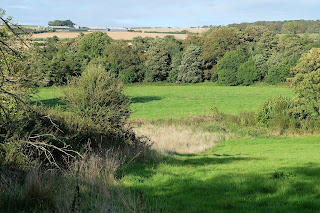 James Wright gave a fascinating talk about ritual protection in old houses. In the 16th and 17th centuries, there was a strong belief in witchcraft, Satan and Hell. “This was a general fear felt by the entire population, and buildings were often marked to ward off spirits. Burn marks were made by holding a candle steadily against the timber for up to 45 minutes to scorch the wood in a linear fashion – quite a dedicated job.”

“There was a fear of witches’ familiars and spirits entering wherever air flowed into a building. So chimneys, windows and doors were especially targeted, with protective marks placed on liminal portals (roof trusses, the queen post above doors, etc.). Carpenters used a special tool, a braze knife, to carve interlocking V marks, and other marks were put on by tradesmen, occupants of the building and servants. Marks were also made for healing, prayer, purification (e.g. in order to purify a particular room or space, such as a former prison room), and Candlemas rituals.”


Spiritual middens are sometimes discovered in old houses, in which broken human rubbish was placed (animal bones, broken tools, pots, pipes, old shoes and so on) in the hope that such rubbish pits would distract spirits from entering the main rooms of the house.


Today we still place horseshoes over doors and hang stockings around our chimneys at Christmas, relics of these old cultural anxieties and ritual protection of the home.

Thanks to Mark Watson for organising a great Hidden Heritage conference.

Roving Press - www.rovingpress.co.uk
If you like exploring Dorset, you'll love our books
Posted by Unknown at 1:58 PM